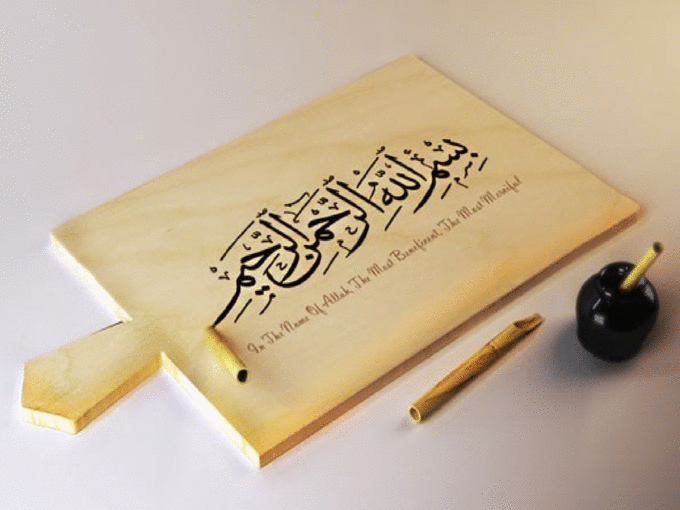 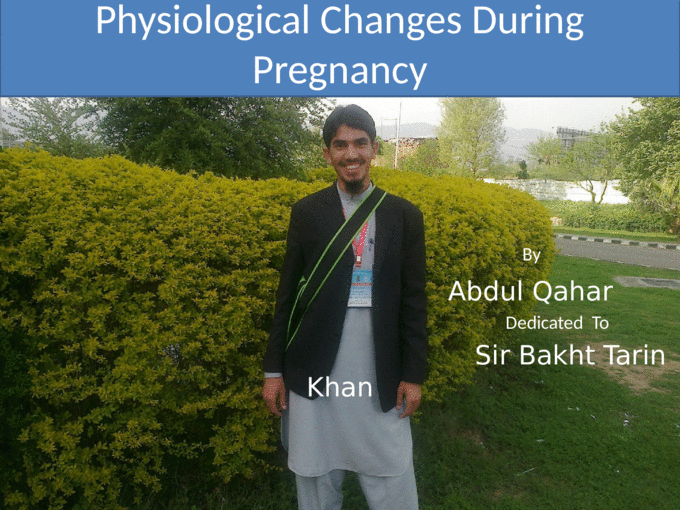 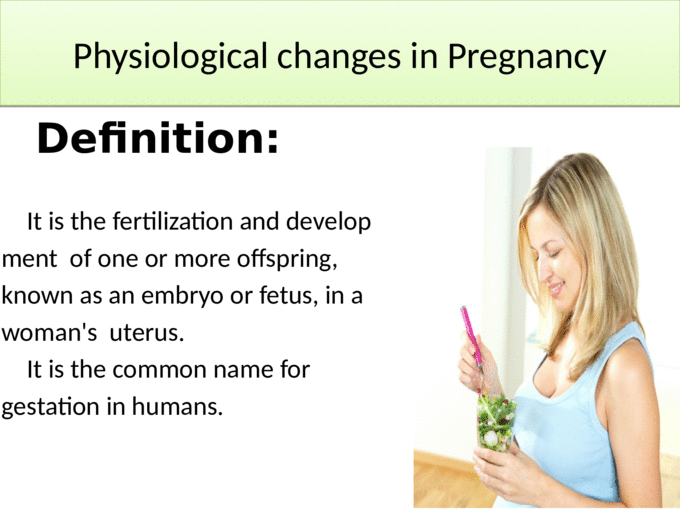 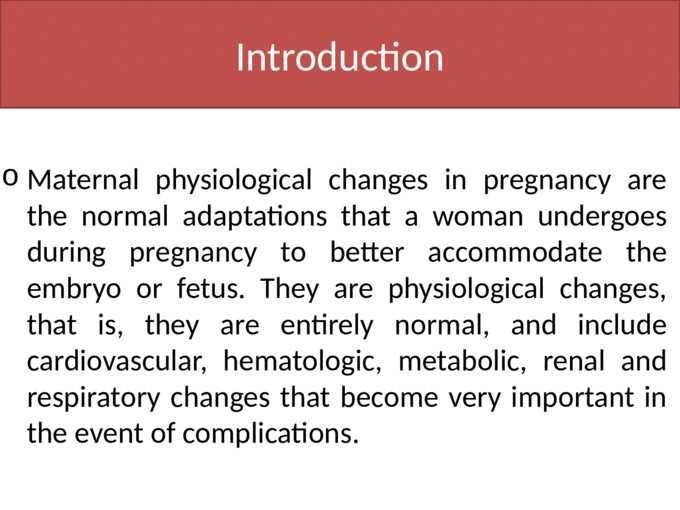 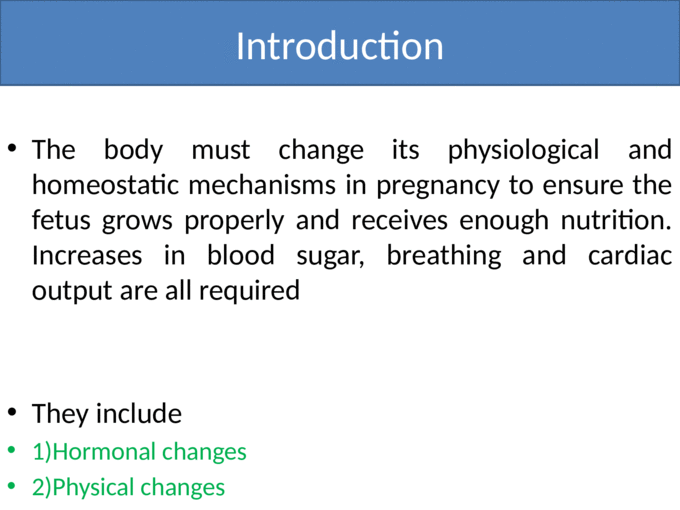 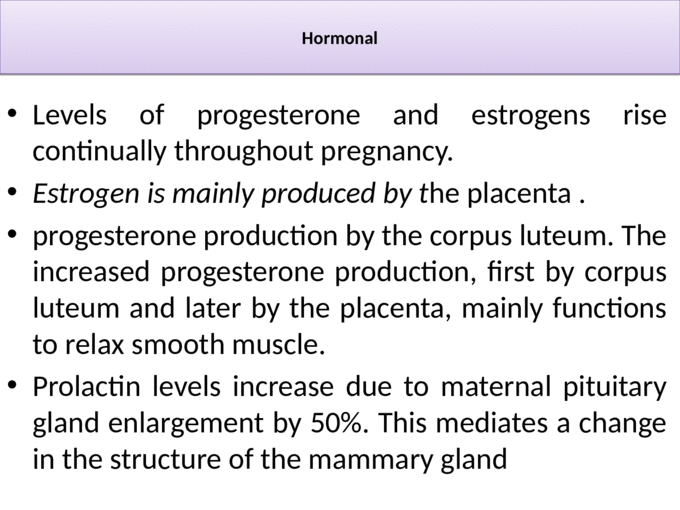 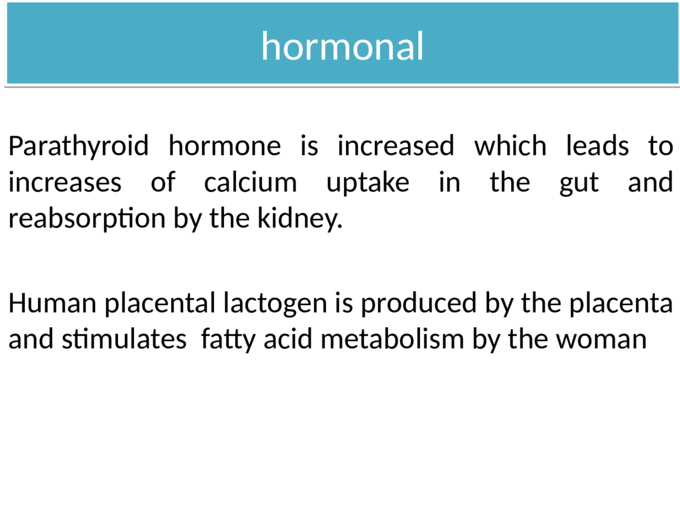 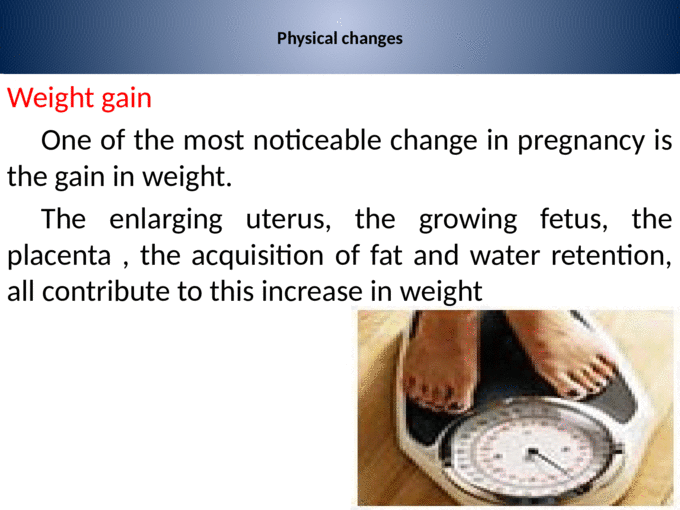 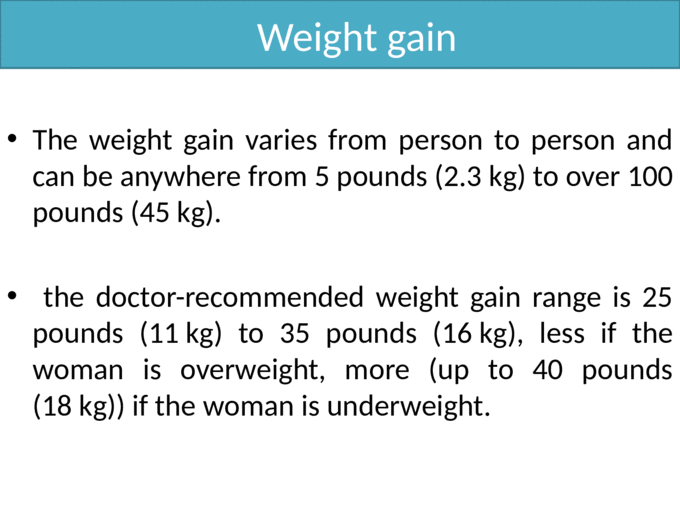 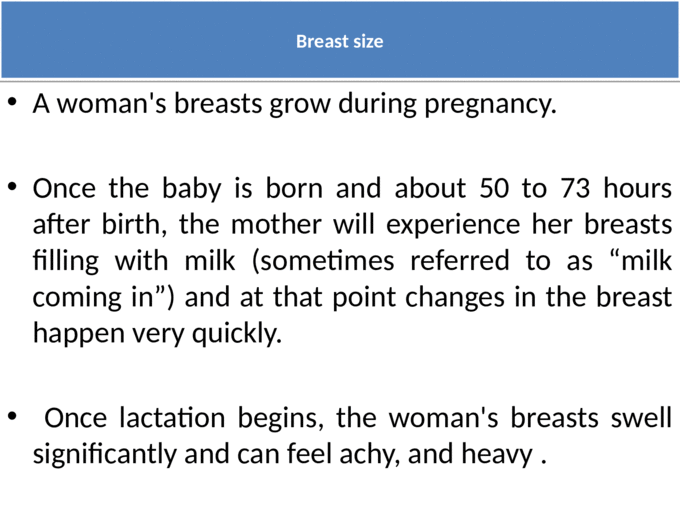 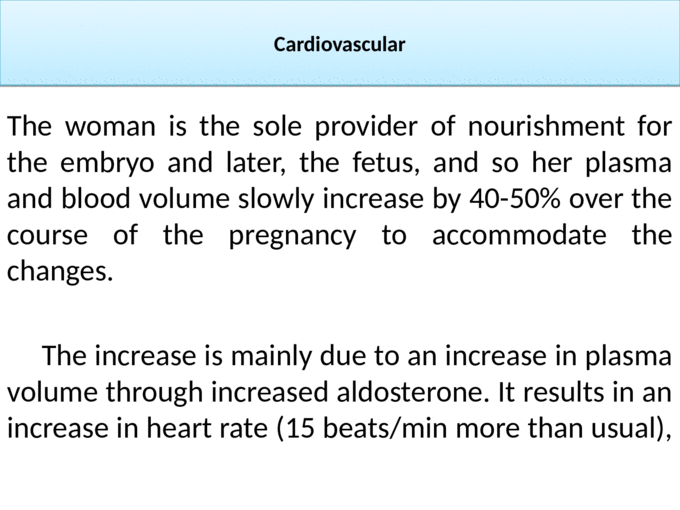 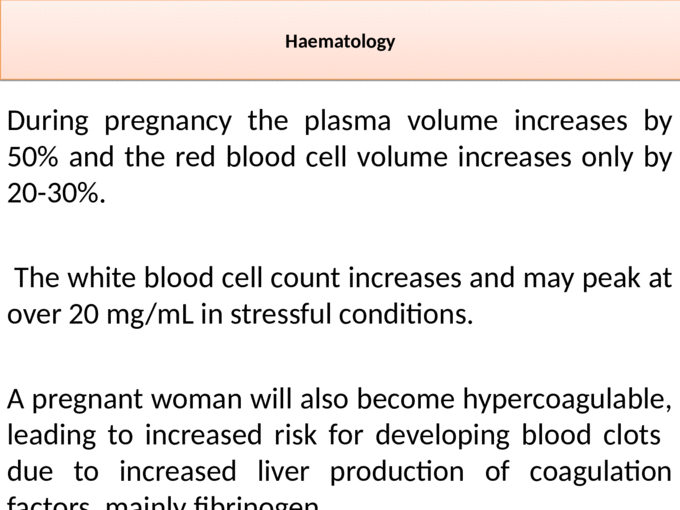 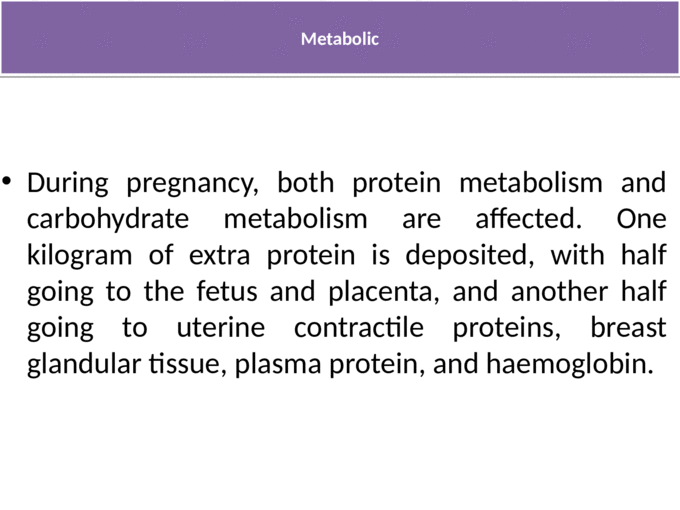 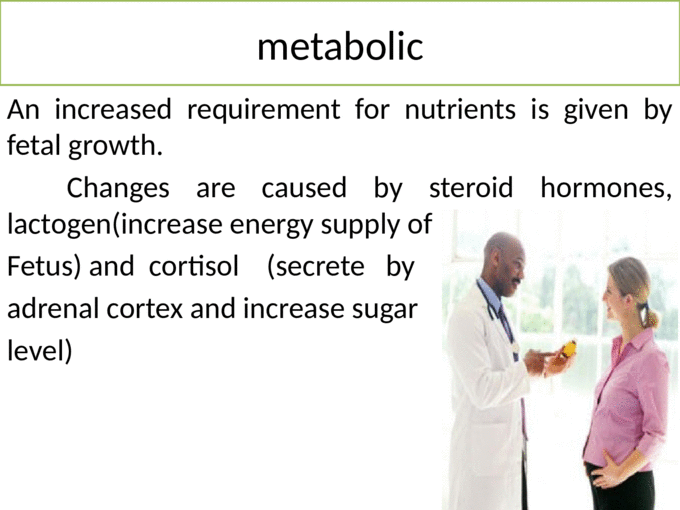 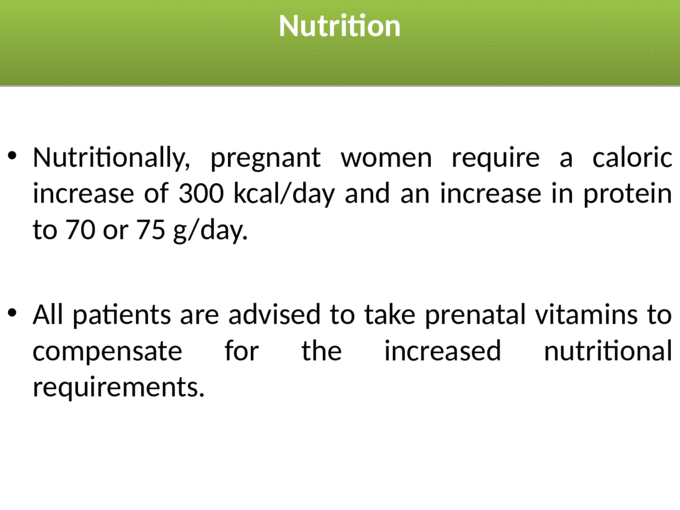 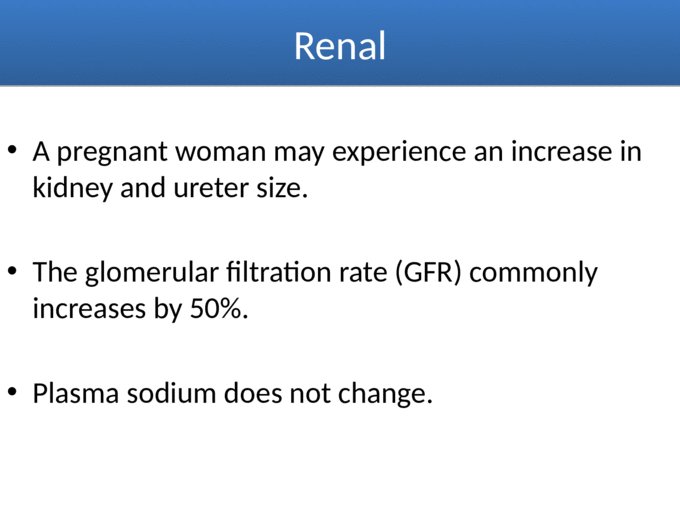 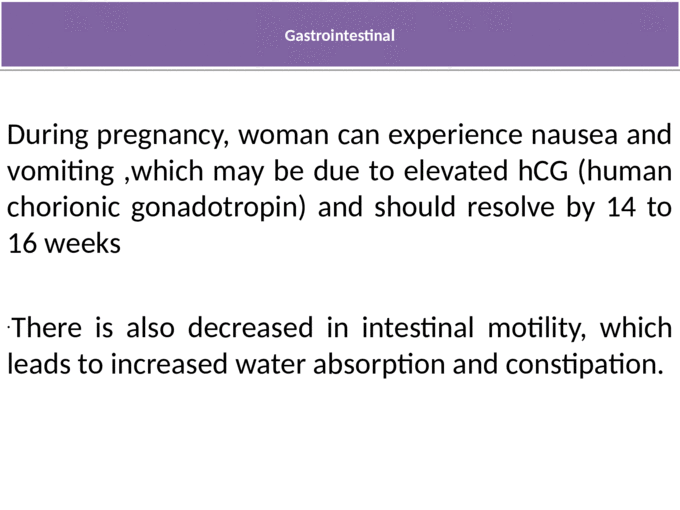 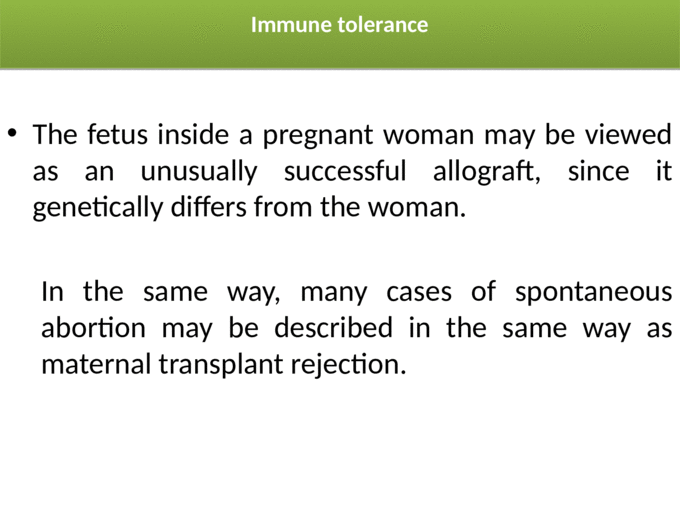 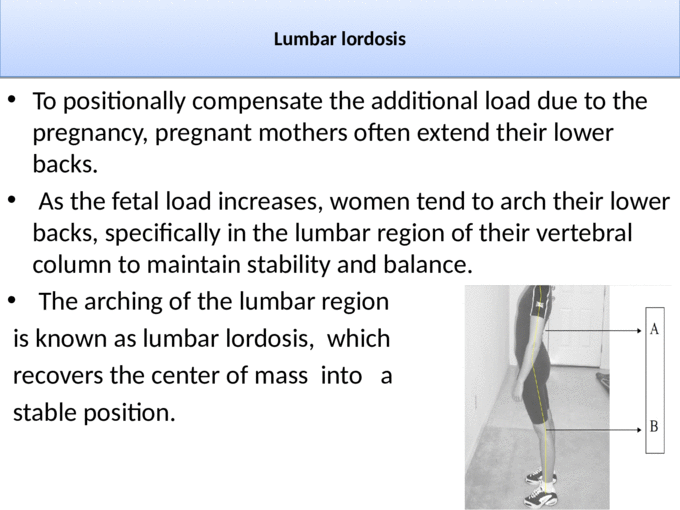 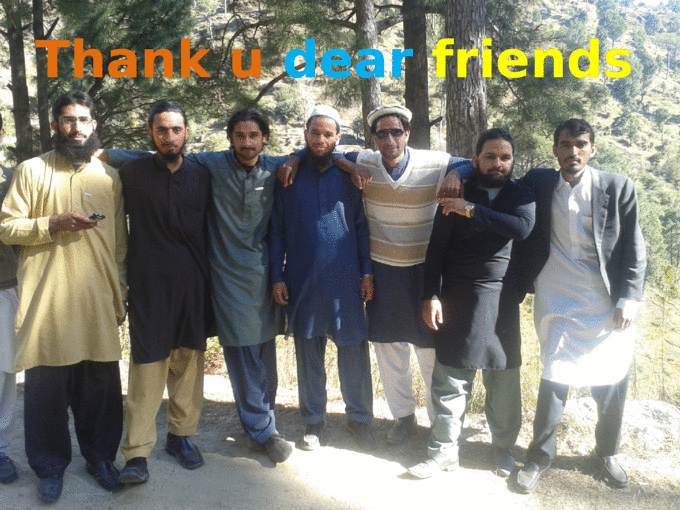 2. Physiological changes in Pregnancy Definition: It is the fertilization and develop ment of one or more offspring, known as an embryo or fetus, in a woman's uterus. It is the common name for gestation in humans. 3. Introduction o Maternal physiological changes in pregnancy are the normal adaptations that a woman undergoes during pregnancy to better accommodate the embryo or fetus. They are physiological changes, that is, they are entirely normal, and include cardiovascular, hematologic, metabolic, renal and respiratory changes that become very important in the event of complications. 4. Introduction The body must change its physiological and homeostatic mechanisms in pregnancy to ensure the fetus grows properly and receives enough nutrition. Increases in blood sugar, breathing and cardiac output are all required They include 1)Hormonal changes 2)Physical changes 5. Hormonal Levels of progesterone and estrogens rise continually throughout pregnancy. Estrogen is mainly produced by the placenta . progesterone production by the corpus luteum. The increased progesterone production, first by corpus luteum and later by the placenta, mainly functions to relax smooth muscle. Prolactin levels increase due to maternal pituitary gland enlargement by 50%. This mediates a change in the structure of the mammary gland 6. hormonal Parathyroid hormone is increased which leads to increases of calcium uptake in the gut and reabsorption by the kidney. Human placental lactogen is produced by the placenta and stimulates fatty acid metabolism by the woman 7. Physical changes Weight gain One of the most noticeable change in pregnancy is the gain in weight. The enlarging uterus, the growing fetus, the placenta , the acquisition of fat and water retention, all contribute to this increase in weight 8. Weight gain The weight gain varies from person to person and can be anywhere from 5 pounds (2.3 kg) to over 100 pounds (45 kg). the doctor-recommended weight gain range is 25 pounds (11 kg) to 35 pounds (16 kg), less if the woman is overweight, more (up to 40 pounds (18 kg)) if the woman is underweight. 9. Breast size A woman's breasts grow during pregnancy. Once the baby is born and about 50 to 73 hours after birth, the mother will experience her breasts filling with milk (sometimes referred to as milk coming in) and at that point changes in the breast happen very quickly. Once lactation begins, the woman's breasts swell significantly and can feel achy, and heavy . 10. Cardiovascular The woman is the sole provider of nourishment for the embryo and later, the fetus, and so her plasma and blood volume slowly increase by 40-50% over the course of the pregnancy to accommodate the changes. The increase is mainly due to an increase in plasma volume through increased aldosterone. It results in an increase in heart rate (15 beats/min more than usual), 11. Haematology During pregnancy the plasma volume increases by 50% and the red blood cell volume increases only by 20-30%. The white blood cell count increases and may peak at over 20 mg/mL in stressful conditions. A pregnant woman will also become hypercoagulable, leading to increased risk for developing blood clots due to increased liver production of coagulation factors, mainly fibrinogen 12. Metabolic During pregnancy, both protein metabolism and carbohydrate metabolism are affected. One kilogram of extra protein is deposited, with half going to the fetus and placenta, and another half going to uterine contractile proteins, breast glandular tissue, plasma protein, and haemoglobin. 13. metabolic An increased requirement for nutrients is given by fetal growth. Changes are caused by steroid hormones, lactogen(increase energy supply of Fetus) and cortisol (secrete by adrenal cortex and increase sugar level) 14. Nutrition Nutritionally, pregnant women require a caloric increase of 300 kcal/day and an increase in protein to 70 or 75 g/day. All patients are advised to take prenatal vitamins to compensate for the increased nutritional requirements. 15. Renal A pregnant woman may experience an increase in kidney and ureter size. The glomerular filtration rate (GFR) commonly increases by 50%. Plasma sodium does not change. 16. Gastrointestinal During pregnancy, woman can experience nausea and vomiting ,which may be due to elevated hCG (human chorionic gonadotropin) and should resolve by 14 to 16 weeks .There is also decreased in intestinal motility, which leads to increased water absorption and constipation. 17. Immune tolerance The fetus inside a pregnant woman may be viewed as an unusually successful allograft, since it genetically differs from the woman. In the same way, many cases of spontaneous abortion may be described in the same way as maternal transplant rejection. 18. Lumbar lordosis To positionally compensate the additional load due to the pregnancy, pregnant mothers often extend their lower backs. As the fetal load increases, women tend to arch their lower backs, specifically in the lumbar region of their vertebral column to maintain stability and balance. The arching of the lumbar region is known as lumbar lordosis, which recovers the center of mass into a stable position. 19. Thank u dear friends

Web viewA.Describe the anatomical and physiological changes that occur during pregnancy. B.Differentiate

Psychological Science on Pregnancy: Stress Processes ... Many of the progressive physiological changes

Pharmacokinetics of HIV-Integrase Inhibitors During Pregnancy ... Physiological changes occurring during

Cardiac Disease in Pregnancy. Physiological Changes in the Cardiovascular System During Pregnancy A thorough knowledge –essential In order to understand

Anatomical and physiological changes during pregnancy