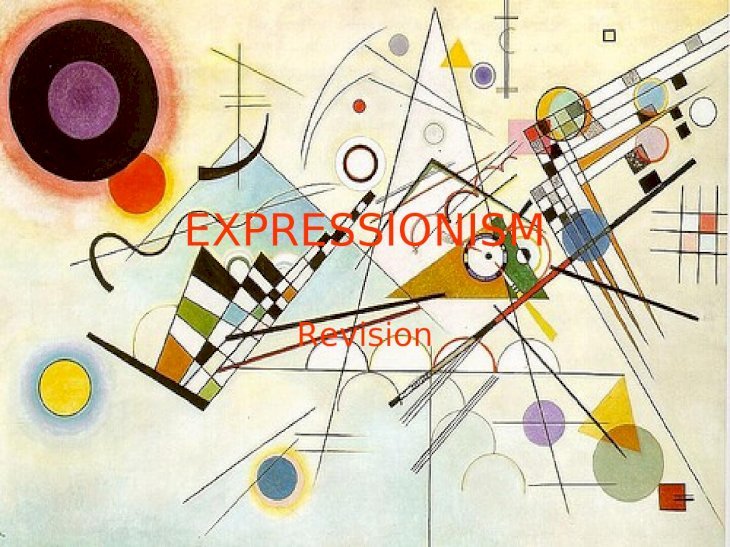 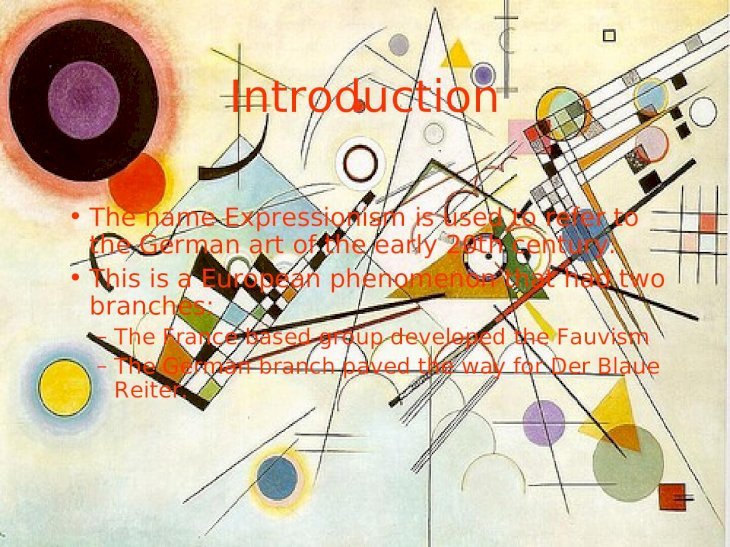 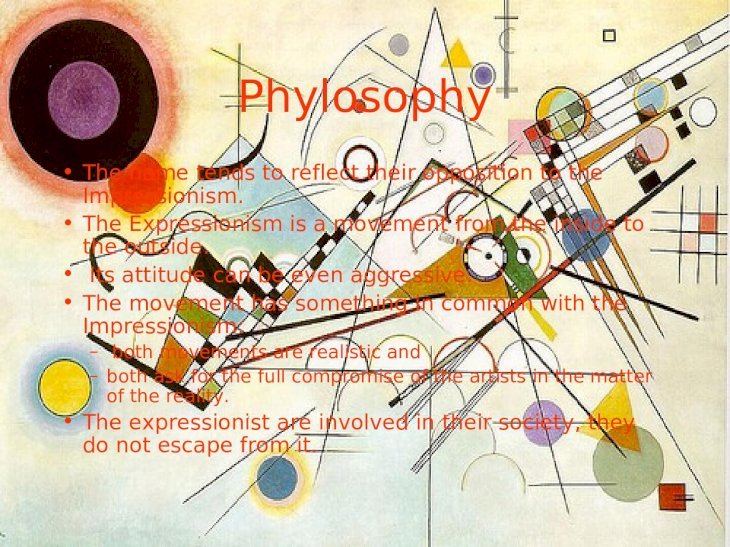 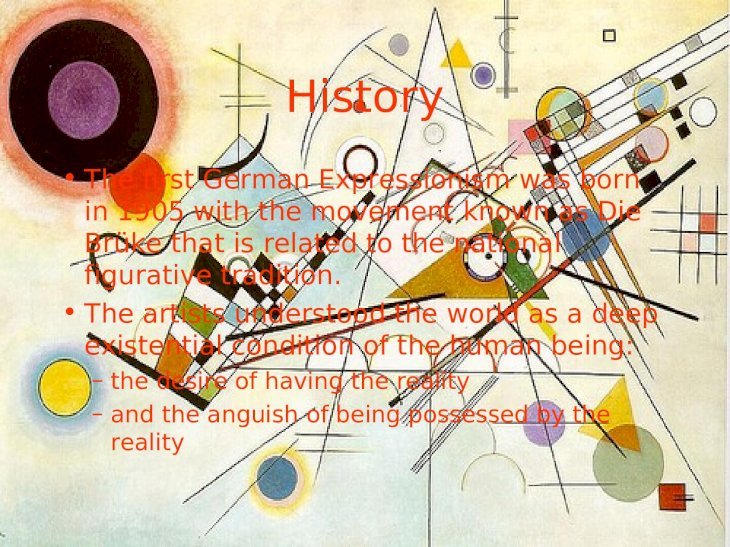 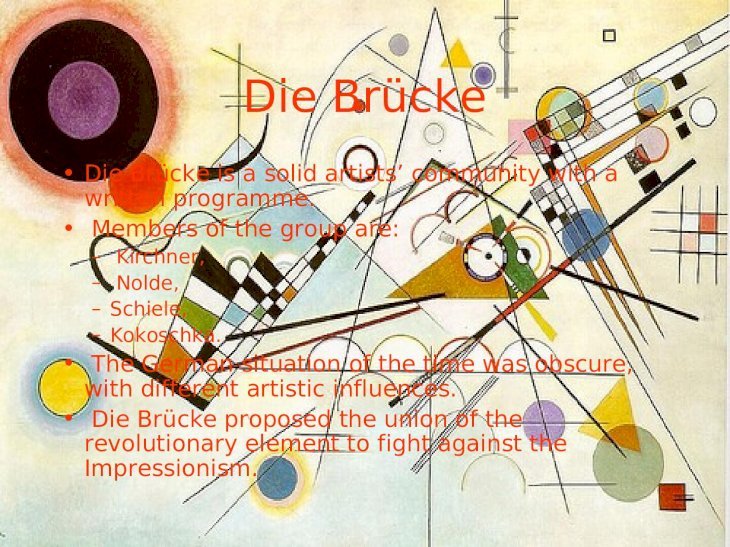 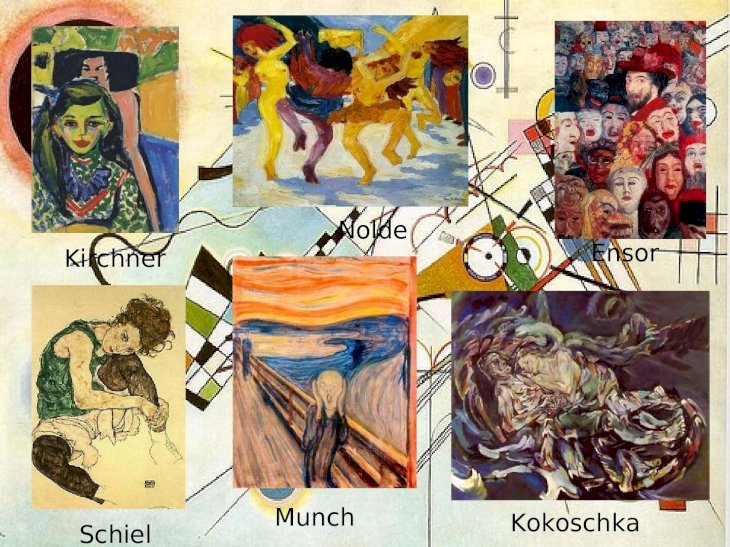 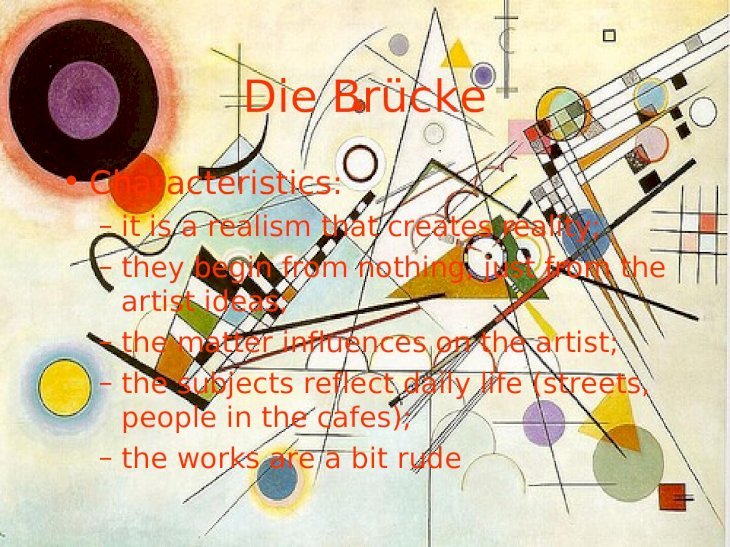 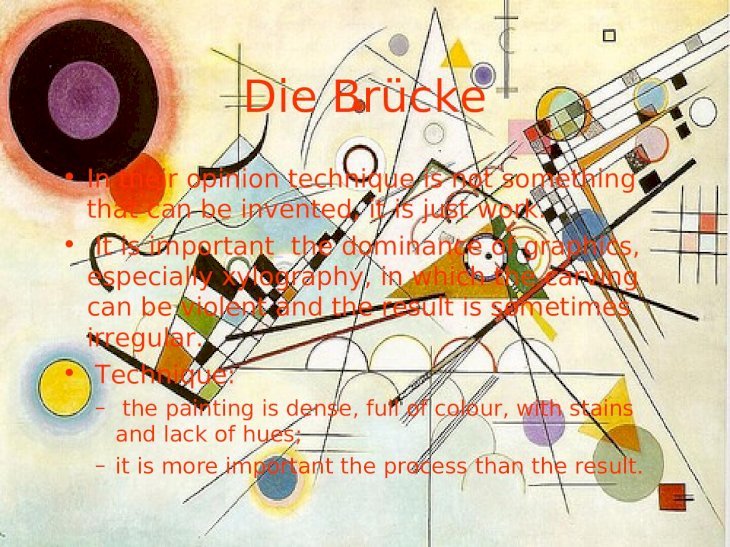 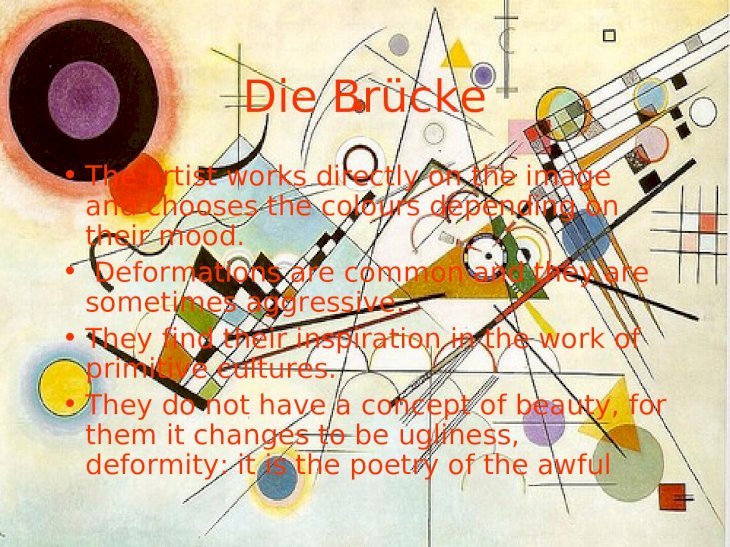 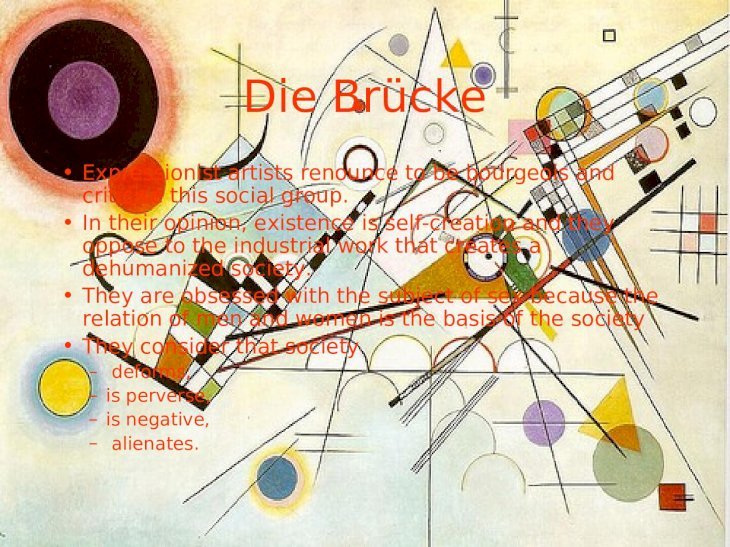 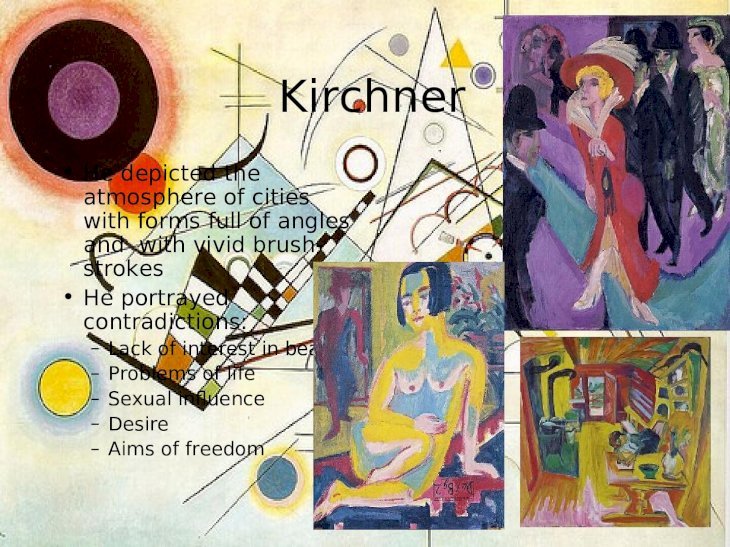 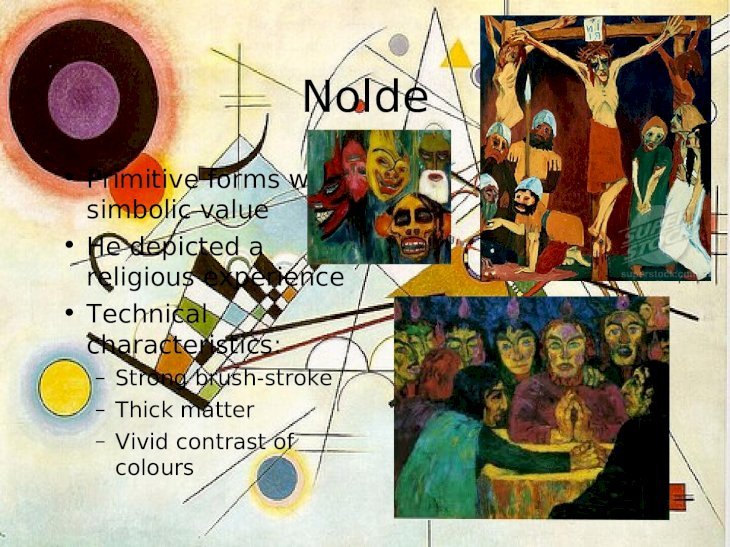 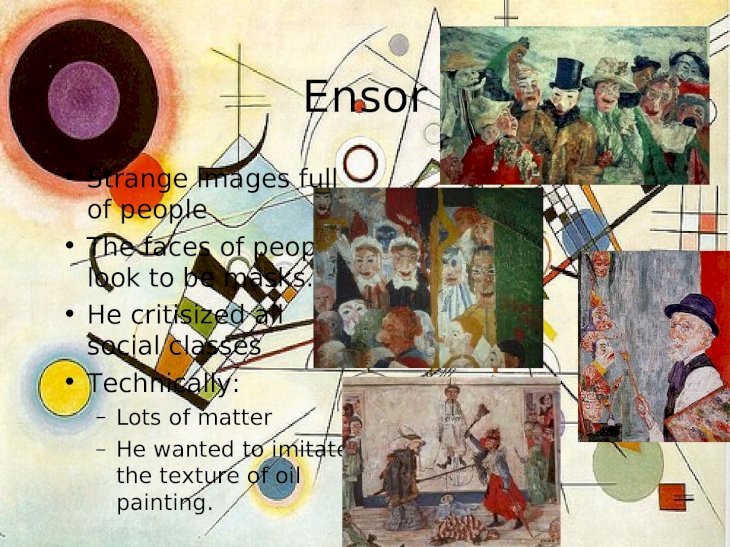 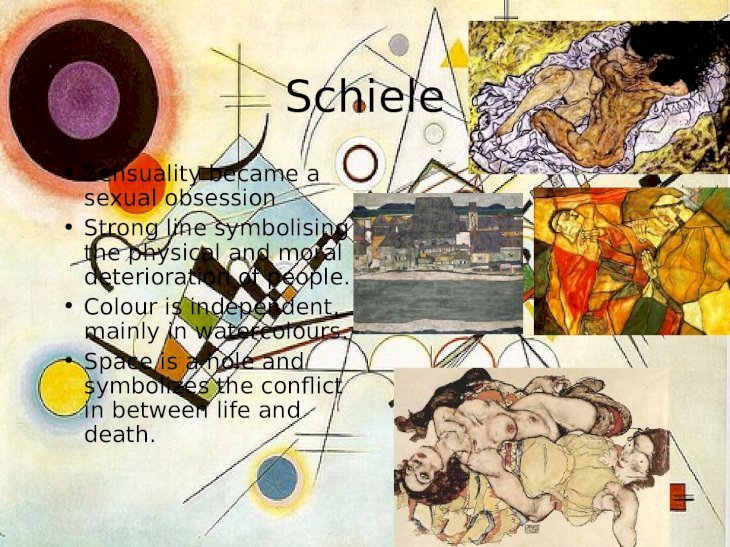 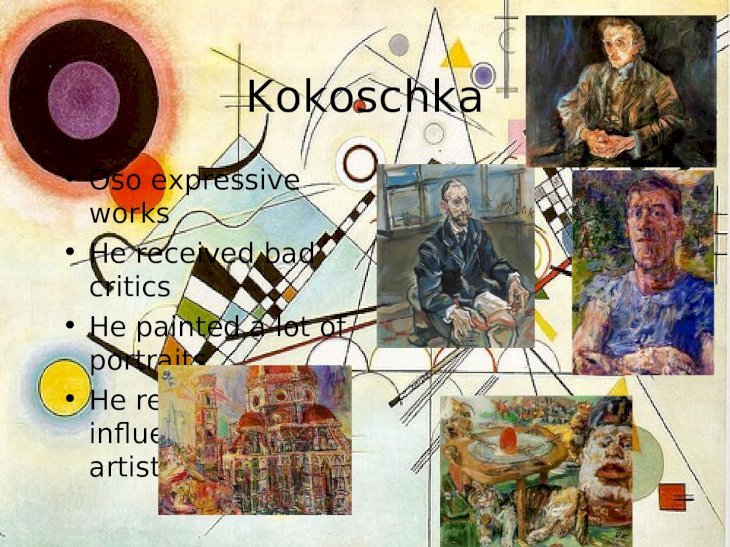 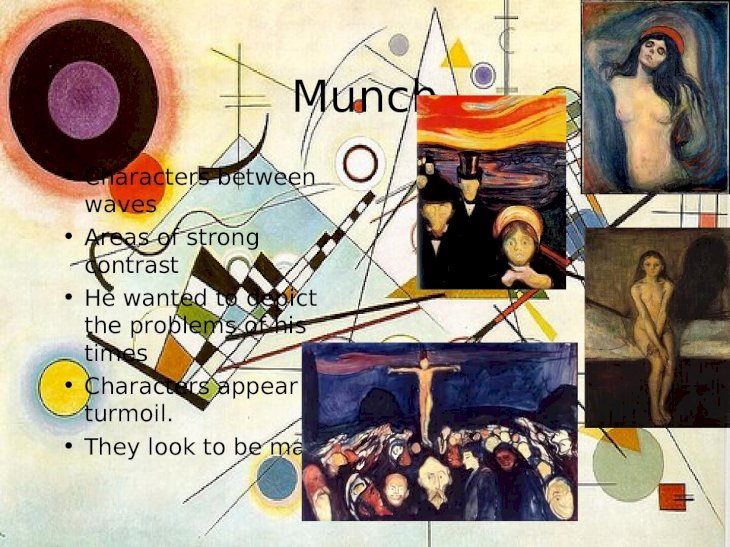 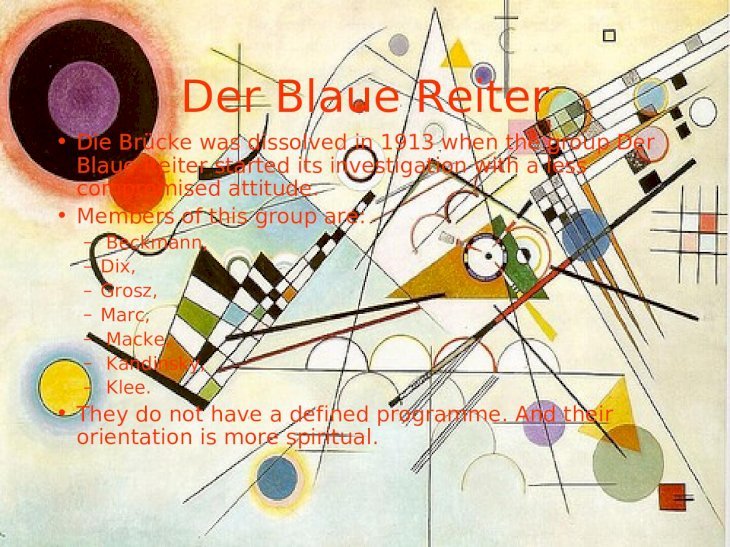 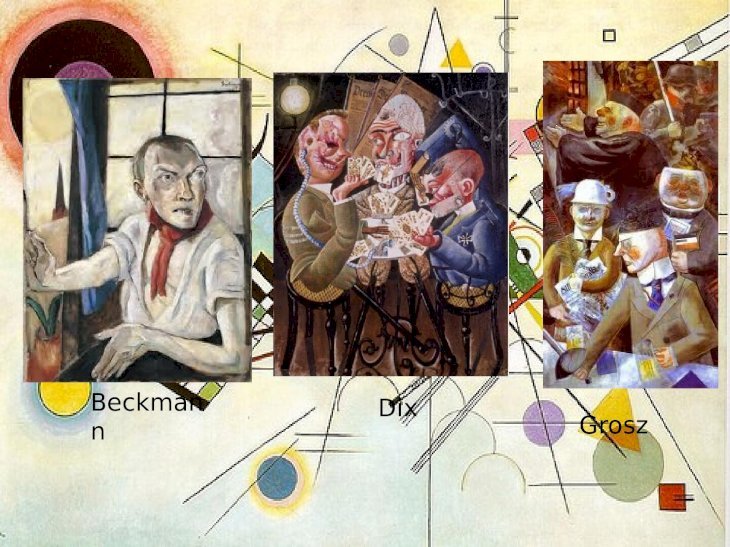 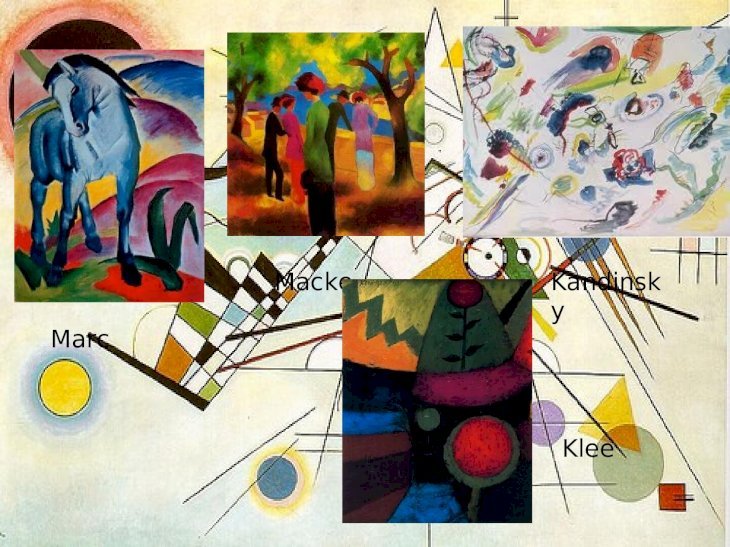 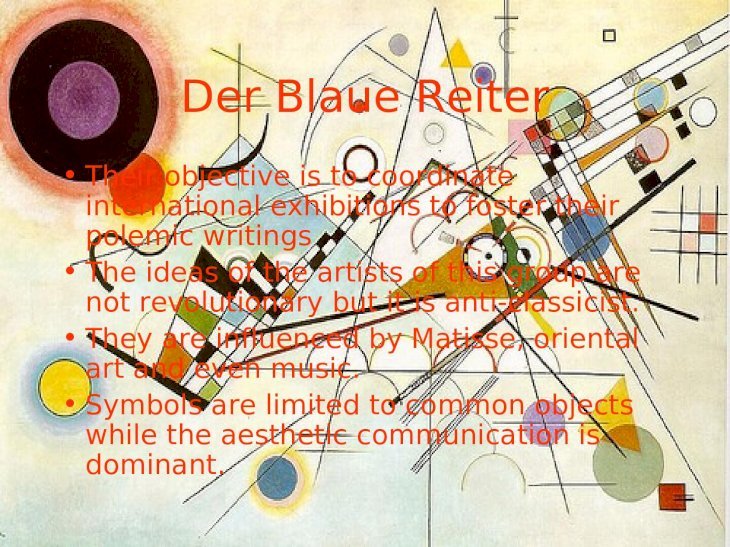 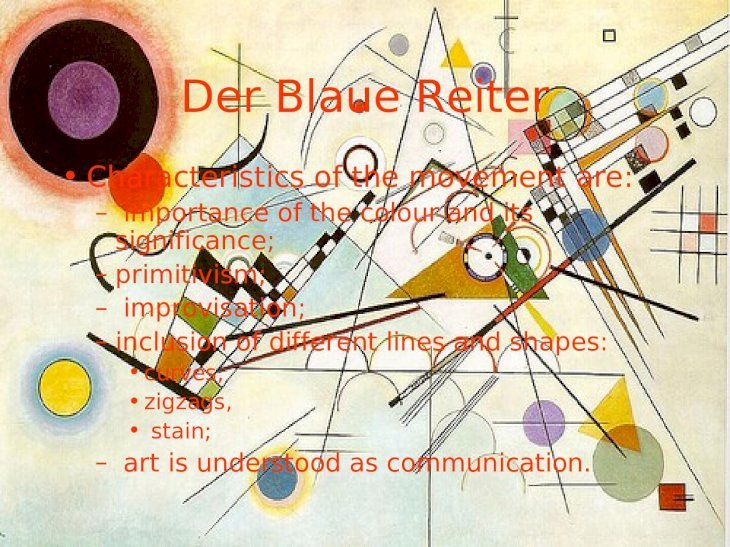 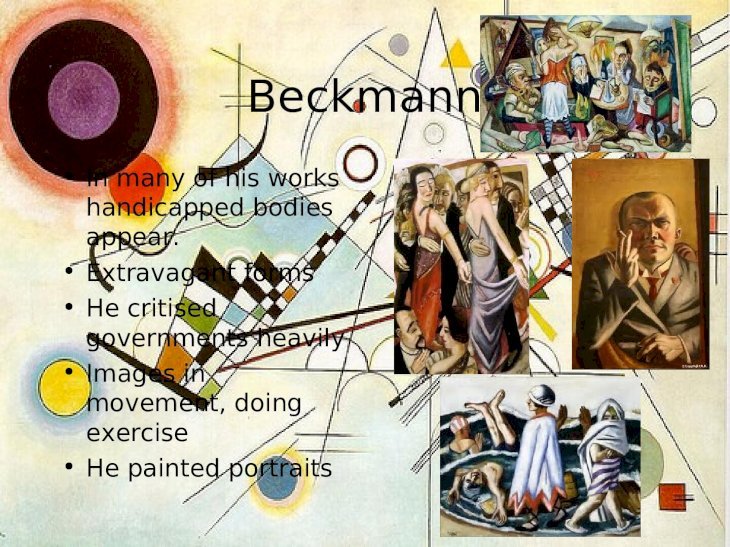 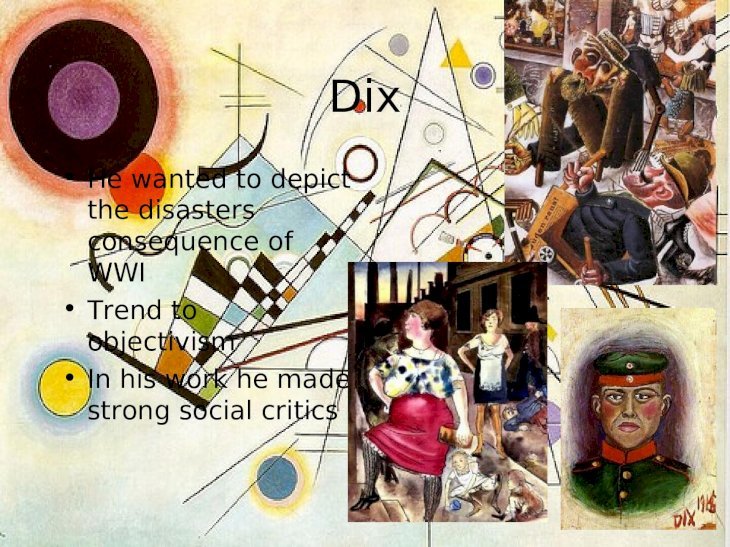 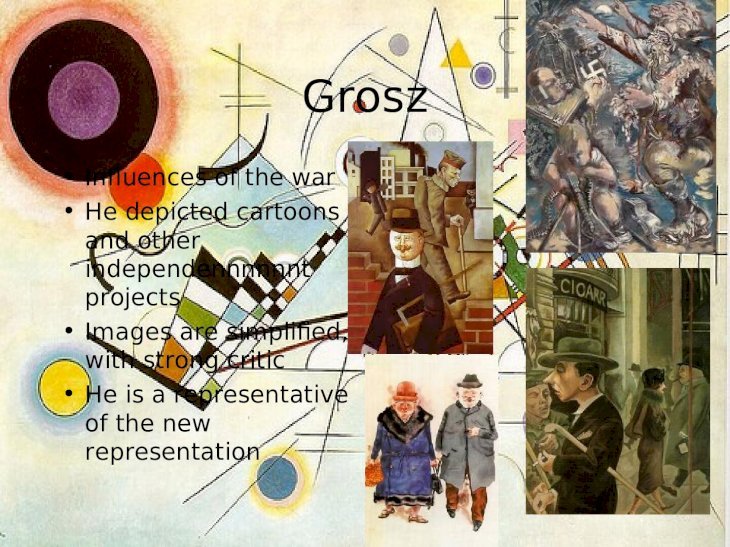 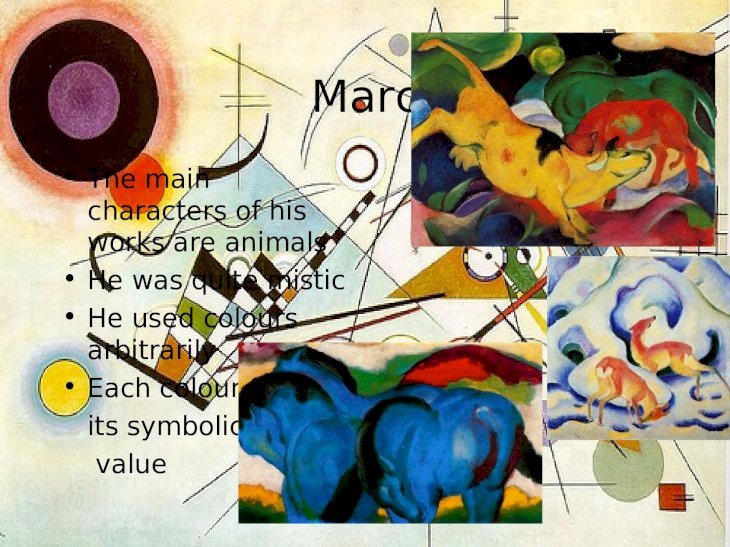 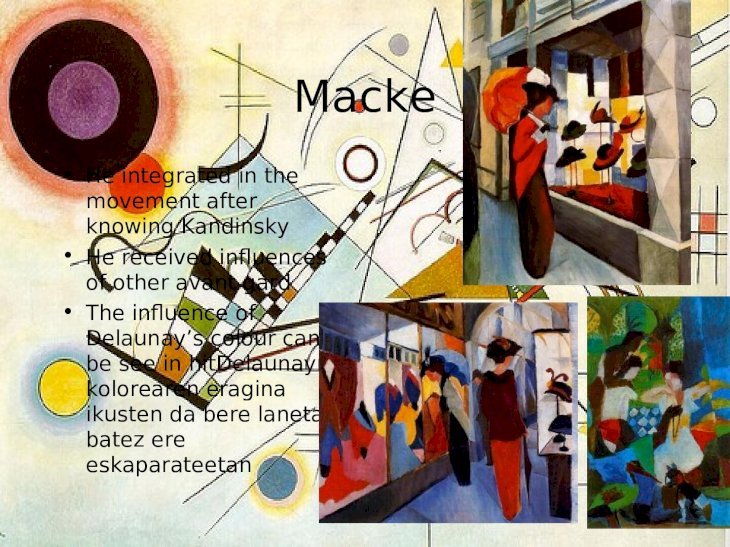 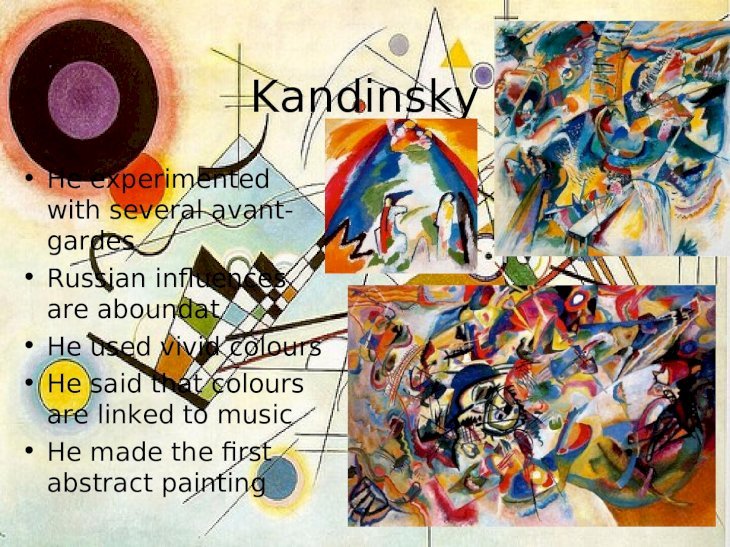 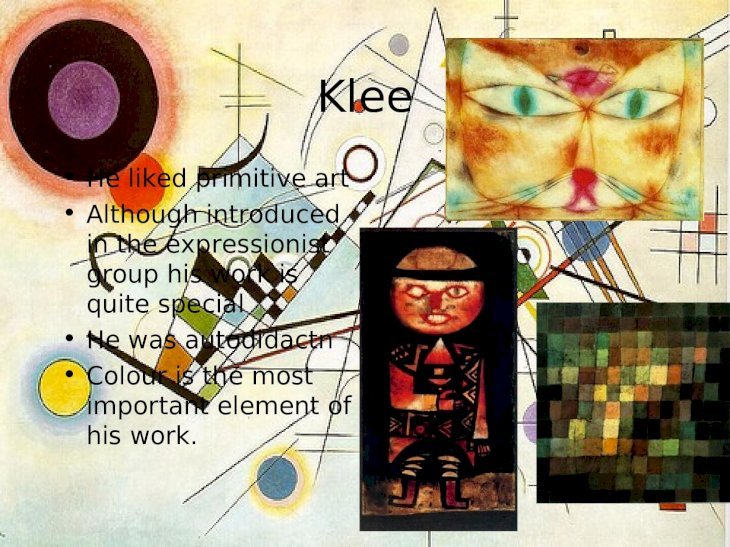 2. Introduction The name Expressionism is used to refer to the German art of the early 20th century. This is a European phenomenon that had two branches: The France based group developed the Fauvism The German branch paved the way for Der Blaue Reiter. 3. Phylosophy The name tends to reflect their opposition to the Impressionism. The Expressionism is a movement from the inside to the outside. Its attitude can be even aggressive. The movement has something in common with the Impressionism: both movements are realistic and both ask for the full compromise of the artists in the matter of the reality. The expressionist are involved in their 4. History The first German Expressionism was born in 1905 with the movement known as Die Brke that is related to the national figurative tradition. The artists understood the world as a deep existential condition of the human being: the desire of having the reality and the anguish of being possessed by the 5. Die Brcke Die Brcke is a solid artists community with a written programme. Members of the group are: Kirchner, Nolde, Schiele, Kokoschka. The German situation of the time was obscure, with different artistic influences. Die Brcke proposed the union of the revolutionary element to fight against the 6. Kirchner Nolde Ensor Schiel KokoschkaMunch 7. Die Brcke Characteristics: it is a realism that creates reality; they begin from nothing, just from the artist ideas; the matter influences on the artist; the subjects reflect daily life (streets, people in the cafes); the works are a bit rude 8. Die Brcke In their opinion technique is not something that can be invented, it is just work. It is important the dominance of graphics, especially xylography, in which the carving can be violent and the result is sometimes irregular. Technique: the painting is dense, full of colour, with stains and lack of hues; it is more important the process than the result. 9. Die Brcke The artist works directly on the image and chooses the colours depending on their mood. Deformations are common and they are sometimes aggressive. They find their inspiration in the work of primitive cultures. They do not have a concept of beauty, for them it changes to be ugliness, deformity: it is the poetry of the awful 10. Die Brcke Expressionist artists renounce to be bourgeois and criticise this social group. In their opinion, existence is self-creation and they oppose to the industrial work that creates a dehumanized society. They are obsessed with the subject of sex because the relation of men and women is the basis of the society They consider that society deforms, is perverse, 11. Kirchner He depicted the atmosphere of cities with forms full of angles and with vivid brush-strokes He portrayed contradictions: Lack of interest in beauty Problems of life Sexual influence Desire 12. Nolde Primitive forms with simbolic value He depicted a religious experience Technical characteristics: Strong brush-stroke Thick matter Vivid contrast of colours 13. Ensor Strange images full of people The faces of people look to be masks. He critisized all social classes Technically: Lots of matter He wanted to imitate the texture of oil painting. 14. Schiele Sensuality became a sexual obsession Strong line symbolising the physical and moral deterioration of people. Colour is independent, mainly in watercolours. Space is a hole and symbolizes the 15. Kokoschka Oso expressive works He received bad critics He painted a lot of portraits He received the influence of other artists of his time 16. Munch Characters between waves Areas of strong contrast He wanted to depict the problems of his times Characters appear in turmoil. They look to be 17. Der Blaue Reiter Die Brcke was dissolved in 1913 when the group Der Blaue Reiter started its investigation with a less compromised attitude. Members of this group are: Beckmann, Dix, Grosz, Marc, Macke, Kandinsky, Klee. They do not have a defined programme. And their orientation is more spiritual. 18. Beckmann Dix Grosz 19. Marc Macke Kandinsk y Klee 20. Der Blaue Reiter Their objective is to coordinate international exhibitions to foster their polemic writings The ideas of the artists of this group are not revolutionary but it is anti-classicist. They are influenced by Matisse, oriental art and even music. Symbols are limited to common objects while the aesthetic communication is dominant. 21. Der Blaue Reiter Characteristics of the movement are: importance of the colour and its significance; primitivism; improvisation; inclusion of different lines and shapes: curves, zigzags, stain; art is understood as communication. 22. Beckmann In many of his works handicapped bodies appear. Extravagant forms He critised governments heavily Images in movement, doing exercise He painted portraits 23. Dix He wanted to depict the disasters consequence of WWI Trend to objectivism In his work he made strong social critics 24. Grosz Influences of the war He depicted cartoons and other independennnnnnt projects Images are simplified, with strong critic He is a 25. Marc The main characters of his works are animals He was quite mistic He used colours arbitrarily Each colour had its symbolic value 26. Macke He integrated in the movement after knowing Kandinsky He received influences of other avant gard The influence of Delaunays colour can be see in hitDelaunayren kolorearen eragina ikusten da bere lanetan, batez ere 27. Kandinsky He experimented with several avant-gardes Russian influences are aboundat He used vivid colours He said that colours are linked to music He made the first abstract painting 28. Klee He liked primitive art Although introduced in the expressionist group his work is quite special He was autodidactn Colour is the most important element of his work.